Home > Patients > What is FES

What is Functional Electrical Stimulation (FES)?

FES is a rehabilitation treatment which stimulates nerves by using small electrical impulses to muscles which have become paralysed, weak or tight due to damage in the brain or spinal cord and aim to help restore usual movement.

What is Dropped Foot?

Dropped foot can cause the foot to catch the ground as the foot swings forward. The front of the foot may touch the ground first instead of the heel. Also, when the foot is on the ground, the body’s weight may be born on the outer edge of the foot, making the ankle less stable and increasing the risk of “turning over on your ankle”.

It is a common problem for people with many neurological conditions and can make walking less safe because of the risk of trips and falls. A dropped foot may be relatively mild, only affecting the person when they are tired or if it is severe may prevent safe walking all together.

How does FES help?

Using small adhesive pads called electrodes placed on the side of the leg, the common peroneal nerve is stimulated, causing the muscles that lift the foot to contract.  A small footswitch is placed in your shoe under your heel and used to turn the stimulation on and off at the correct time while you walk. This enables normal foot lift and walking is made safer, faster and less effort.

For most people, FES is used as an assistive device, directly improving walking while it used. FES may also have a training effect for some device users, improving their walking without FES after it has been used for several weeks or months. This training effect is more common for people with a dropped foot due to stroke, spinal cord injury or Parkinson’s disease and less common for people who have MS.

How else can FES be used? 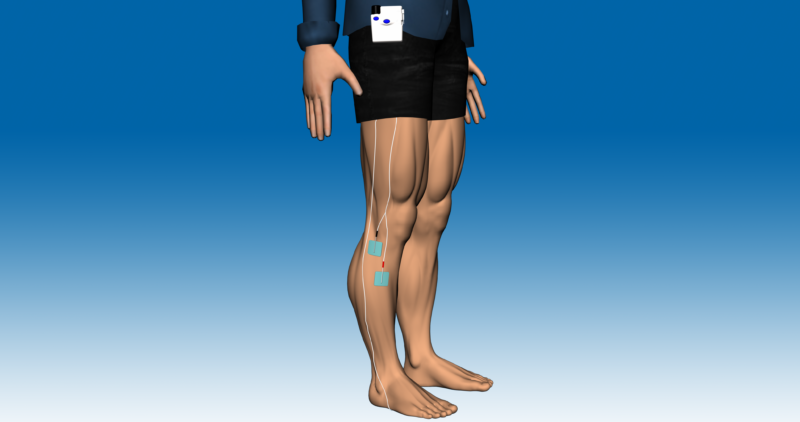